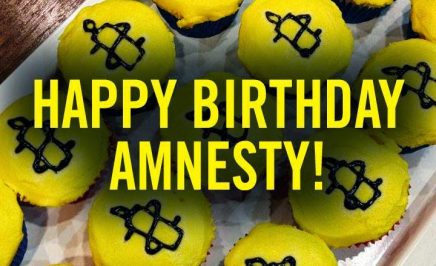 MDEG members joined with members of Mudgee Amnesty to celebrate 60 years of that organisation advocating and engaging in activism for human rights.

Our organisations have shared strategies of advocating and engaging in activism. So, just what is activism? Here is what the experts say…

Activism is about taking action and advocating for change on an issue that is important to you. It’s also about inspiring others to take action as well. An action is any activity that puts pressure on the people with the power to do the right thing on your issue. That pressure you create might be large or small, but when combined with everyone else’s it can be enormous.

These actions take many forms and range in terms of complexity. It could be something as quick and easy as signing an online petition or communicating with a politician by letter or email. It’s volunteering your time to ensure there is capacity to for deeper activism on the ground. It might be educating other people in the community on an issue and encouraging them to take action. It could be meeting with those in power face to face to tell them what needs to change. It’s helping to grow a movement to increase power and impact. But it’s also about doing it in a way that works for you based on your own capacity and what you’re comfortable with doing. Only you can define your own activism and role as an activist.

But, before we can reach the stage where we each take action, we first have to have a plan. We call this plan a campaign strategy, it’s a road map to get us to where we need to go. The first step is to identify what the issue is through our research. Once we have a clearer idea of what the actual problem is, we know what we need to change. This means we now know what our ultimate goal is.

We then identify who in power has responsibility for making this change. We inform them that we know about the problem and try to influence them to make change. Often these decision makers tend to be reluctant to champion change for a variety of reasons. For example, public perception is a primary concern of theirs. By taking a supportive stance in favour of change they could risk losing their position of power. But, they may also have a fundamental opposition to the changes we are proposing.

This extract is from Amnesty International document ‘102 Introduction to Activism’.