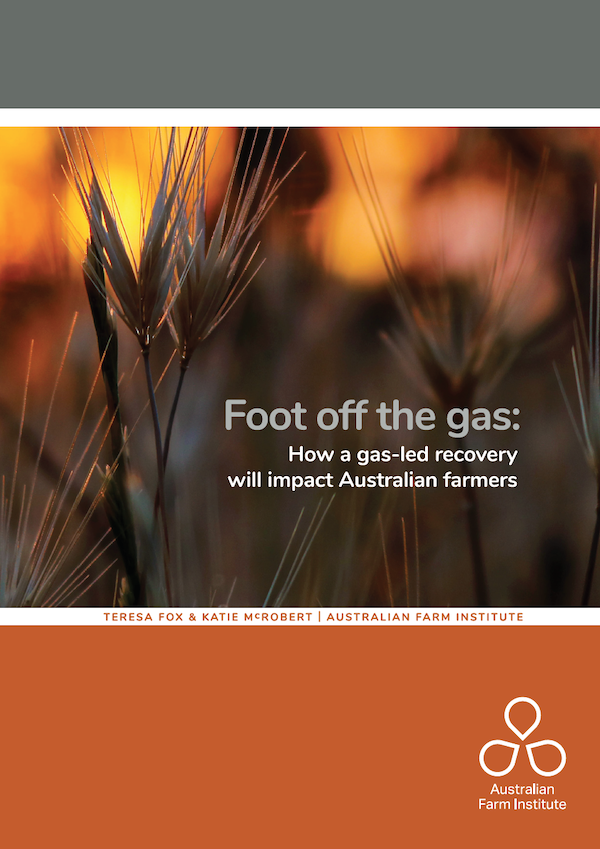 Australian farmers, and the communities where they live, face negative environmental, economic and social consequences if the Federal Government’s plans for a ‘gas-led recovery’ go ahead, new analysis commissioned by Farmers for Climate Action has found.

The briefing paper, written by the Australian Farm Institute, found that while gas expansion could worsen climate change, deplete or contaminate groundwater, and harm farmers’ mental health, a ‘renewables-led’ economy would have win-win outcomes for farmers and the economy.

Farmers for Climate Action chair Charlie Prell said:  We are already feeling the impacts of climate change out here.

“Gas is a fossil fuel. Extracting and burning more gas will only make climate change much worse. Worrying about the impact of gas expansion on our groundwater, land, income, and the future of farming keeps us awake at night.

“Farming is hard enough already and climate change is adding to the difficulty of running sustainable farms. Instead of greenlighting projects like Santos’ Narrabri project and wasting taxpayers’ money on gas, the Federal Government should back a renewables-led recovery that creates jobs and growth without wrecking farming livelihoods,” Mr Prell said.

Bentley mixed farmer Meg Nielsen, who together with her husband Peter were part of a community that successfully fought a proposed coal seam gas development in the Northern Rivers a few years ago, said: “Climate change and water scarcity are existential threats for farmers, and gas expansion increases the risk of both.

“Farmers are on the front line of climate change and any increase in temperature is madness. The science says that we need to cap temperature rise at well below 2°C to have a safe hospitable climate. To do that, we can’t have new gas.

Briefing paper author and AFI executive director Richard Heath said: “The co-existence of gas production and farming comes at a compromise to agriculture. Above-ground impacts can range from minimal to severe, but the potential below-ground impacts to aquifers is very difficult to measure and could be catastrophic.

“Any decision that poses such a great risk to water security must be based on robust evidence. When it comes to gas production and agriculture, we just don’t have that assurance that modelling is accurate, that water – and the farmers who rely on it – will be safe.

“Rather than expanding gas production, we should be erring on the side of caution to protect our farm sector, especially when alternative renewable energy sources that carry much less risk for farming communities are rapidly maturing.”