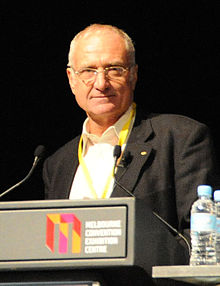 Robyn Williams is all about the pleasures of frugality. No, not comedian Robin Williams…the other one…our very own Aussie science broadcasting legend Robyn Williams! He has been presenting The Science Show on ABC Radio since 1975, Ockham’s Razor since 1984 and In Conversation since 1997.

In his book ‘Turmoil’ Robyn discusses how he lives without a mobile phone, a car, or a camera. The last time he bought clothes was about 15 years ago. This is all his choice. He is driven by environmental concerns and aesthetics. ‘It seems to me to be pointless to buy things that just hang about. Why drive and sit in gridlock when I can just hop on the bus and read? Most of the time I walk. I listen to the radio on a $25 headset, I stroll through the streets, and I look around and see people and it’s nice.’

Waste and consumerism make him very angry. ‘In terms of energy, America spends as much on growing food as Britain does on everything put together. If you saved that waste, in terms of energy, you’d have enough to power the whole of Sweden and Switzerland. That’s the scale of what could be saved if only we bothered. Yet when I come into the office in the morning, all the computers are on and all the lights are on. It makes me very angry.’

‘I script the radio shows on an electronic typewriter. You’re locked into the meticulousness of not being able to wipe out anything. I haven’t got any white-out. I use the reverse side of address sheets you get when you’re sent magazines. I haven’t used new paper since 1972.’

‘As for mankind’s script, in 2020 people realise they have a problem and have to get together. They realise we have more in common than we have differences. They realise we can turn things around. We’ve got a straight choice. It’s the ultimate challenge of civilisation.’ Source: ABC Organic Gardener Issue 109.