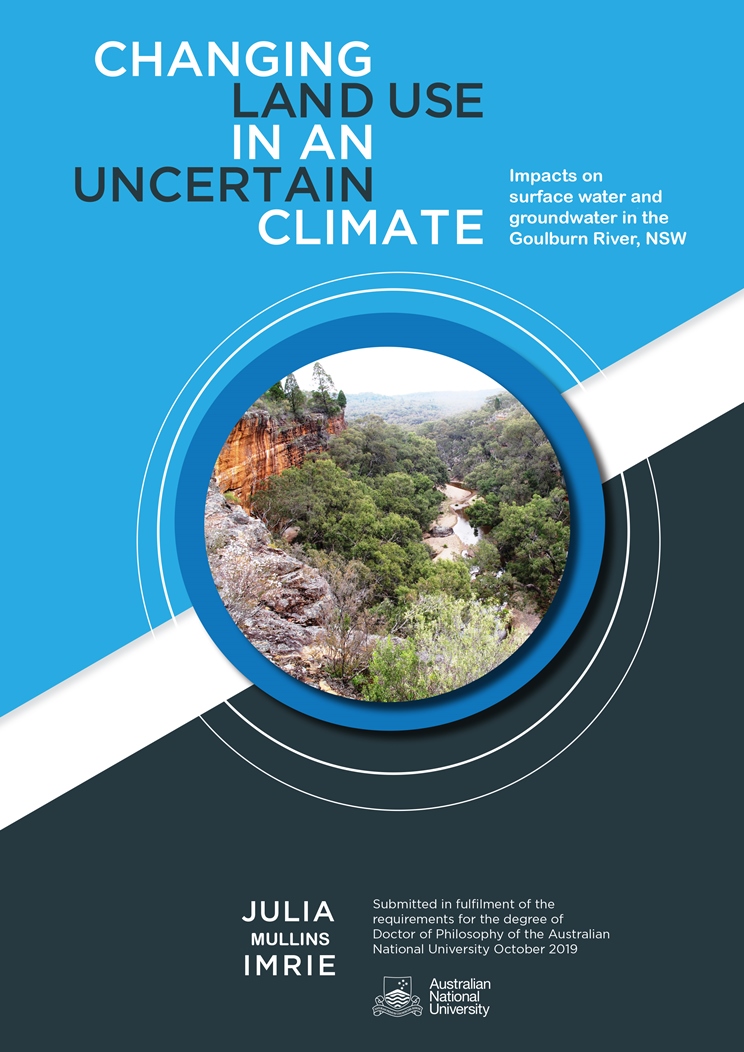 Mudgee District Environment Group has much pleasure in joining with Dr Julia Imrie in presenting a copy of her doctoral thesis to Mid-Western Regional Council Library:

“Changing land use in an uncertain climate;

Impacts on surface water and groundwater in the Goulburn River, NSW”

The Goulburn River while the largest tributary of the Hunter River is one of the least studied and understood catchments in NSW. Dr Imrie’s research makes a significant contribution to understanding this complex catchment where natural processes are added to or altered by land-use and climate change.

The study found that the overall decrease in the amount of surface water in the river system (or catchment yield) since the 1970s was most likely due to losses in stream baseflow rather than a decreasing trend in rainfall or changes to rainfall distribution. In addition extracting more water from lower salinity catchments would increase the Goulburn discharge of salts into the Hunter. Equally important, any decrease in rainfall with climate change would further decrease fresh water discharge and increase salinity.

A key objective was to investigate the salinity of the catchment‘s geologies to determine the source of salts found in surface water and groundwater and how water quality is being altered by changing land use and rainfall. The research highlighted the important role of freshwater inputs from low salinity geologies in the Goulburn for maintaining water quality, baseflows and resilient healthy ecosystems. The Narrabeen Group of Triassic sedimentary rocks was found to be a crucial regional freshwater resource.   Triassic groundwater is generally regarded as low yielding based on pump extraction data. However while exhibiting a low flux; the volume of groundwater held in Triassic sandstone strata can be significant, and important in mitigating salinity and maintaining water dependent ecosystems during extended dry periods.

Dr Imrie found that mine water discharge in the headwaters of the Goulburn has increased salt loads in the river. In the period 2012-2016 direct mine water discharges from one mine, with a mining footprint 1.4% of the upper Goulburn catchment contributed over 13% of the river’s salt load. Mine water discharge exported over 10 times the upper catchment’s annual average salt yield of 5.5 tonnes per square kilometre per year. NSW Government mandated salinity levels for mine discharge water are set much higher than pre-mining and background levels. There is a need for regulations governing water extraction and mine water discharge to reflect pre-existing stream chemistry, salinity and connectivity between surface and groundwater rather than mine operational priorities.

The discharge of surplus mine water in the upper Goulburn is presumed to offset the estimated baseflow losses in the river system; however the direct and indirect loss of surface and groundwater due to mining, is essentially unquantified. Dr Imrie warns that groundwater modelling used in the approval of the three mines in the upper Goulburn significantly underestimated the impact on groundwater system. Her research argues mine subsidence and groundwater depressurisation has altered the general hydraulic gradient or direction of groundwater flow away from the river towards a regional sump created by mining – intercepting fresh aquifers and baseflow.

The study investigates a groundwater dependent ecosystem in the upper reaches of the Goulburn River known as ‘The Drip’ gorge. This impressive feature and river reach has been classified by the National Trust as a significant heritage and conservation landscape. The Drip is fed by an extensive perennial spring that seeps from a multilayered sandstone cliff overhanging the Goulburn and has supported a range of water dependent plant species through major droughts over the last century. This research uses The Drip as a ‘window into groundwater’ for understanding the relationship between the groundwater system and base flows in the river.  The report shows that future longwall mining near the river has the potential to significantly lower the regional water table on both sides of the river by up to 20 metres affecting the springs, seeps and groundwater that feed this ecosystem.

The chapter on the Merriwa River investigates the hydrogeology of this major agricultural tributary with the highest salt output of all the sub-catchments. The direct relationship between stream discharge and stream salinity means that granting additional water licenses and failing to regulate water use when coupled with periods of low rainfall will inevitably increase salinity discharge into the Goulburn and Hunter Rivers. Deep town water bores were found to be accessing Triassic groundwater sources than the previously thought Oxley Basin.

We commend this report to you. It provides an excellent reference regarding the surface and groundwater interaction, and the impacts of land use, on the Goulburn River catchment.