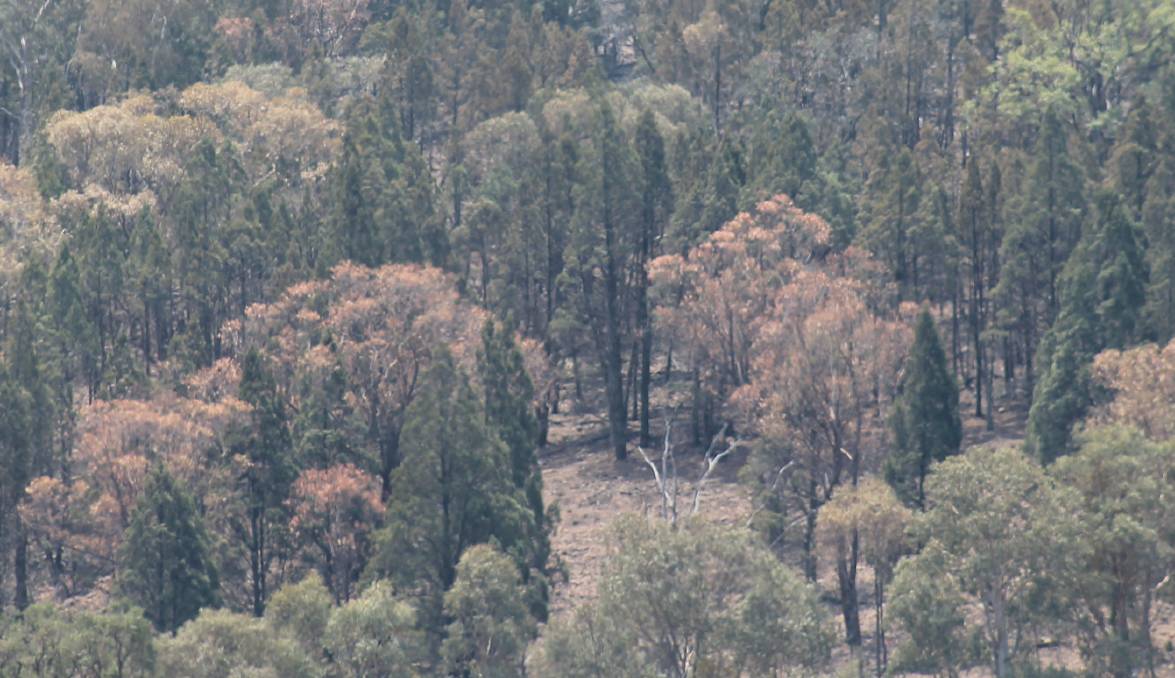 Swathes of trees in multiple areas of the Mid-Western Region – and indeed across the state – look like they’ve burnt by fire even though no such event has occurred, and a research project is asking locals to help document this.

The Dead Tree Detective is a citizen science project, run by researchers from the Western Sydney University, to collect observations of dead or dying trees around Australia. It was set-up over a year ago to help better understand the physiology of tree mortality.

However, as the drought wore-on Associate Professor Brendan Choat said that photos submitted started to show larger-scale patches of dead trees – including natives.

“There are a lot of things associated with die back; fungal pathogens; various insects and pests, bark beetles; climate; soil moisture; frost; and fire,” he said.

“Now it’s at the point where some parts of NSW it’s hard to work out if it’s been burned or if the drought has caused the leaves to die off.

“A lot of people are saying ‘we’ve never seen anything like this’, which is interesting for a country that’s been exposed to drought for a long time.

“We’re not really aware of any reports during the Millennium Drought of canopy and tree die back on this scale, so this seems to be different in terms of its impact on vegetation and the amount of water stress the trees are experiencing.”

During 2019, Mudgee did record its third driest year during the past century, with just 367.7 millimetres of rainfall was recorded by the Bureau of Meteorology (BoM), which is just over half of the long-term mean for Mudgee of 670.3mm.

A breakdown of trees’ complex water transport system, due to ongoing dry conditions, is likely what’s causing the damage to their canopies and producing this “burnt” look.

Choat said that they’re not able to get water to their leaves.

However, what’s striking is that it appears to be occurring in vegetation that should be able to tolerate their environment – they’re hitting their “threshold”.

“As a drought goes along, the trees will get more stressed and at some point they hit a threshold, in which they get a rapid increase in the amount of cavitation embolism in the vascular system,” he said.

“Meaning that suddenly it will be unable to transport as much water as it previously could.

“The threshold varies a lot between species – those that grow in dry areas tend to be able to tolerate more than those in wet areas – they’re tuned to the environment they grow in. And what we’re seeing in this case is a lot of types of forest and woodland where that threshold is being overcome.”

Contribute to the project

The Dead Tree Detective project is open to members of the public who notice dead or dying trees in your area, to upload a photograph with date and location.

If you’re out with your smartphone – camera and GPS required – you can take a photo, which has a geo-tag and upload to the project to pin-point what you’ve seen. This identifies where tree death is occurring, which can be used for future study sites for follow-up measurements on the impact.

Choat said that the project is to fill in gaps in this kind of data. And that people tend to respond to the format of “citizen science projects”, which provide invaluable extra information such as local knowledge.

“One of the motivations for the project is that there’s not really any real systematic monitoring of forests and woodlands in NSW. In other parts of the world, like the United States and Europe, they have very detailed monitoring programs that are run by agencies like the USDA Forest Service,” he said.

“In Australia there was patchwork monitoring by different agencies, but it was in pieces and never really digitised and fell away as budgets dropped off.

“There has been huge success with citizen science projects around the world and it’s quite amazing how much people are willing to do and how much of their time they’re willing to volunteer. And for the death of trees, those events are noticed by citizens in the first place – members of the public, farmers, bushwalkers – and we’re trying to harness that.

“It’s been really useful to have the context that people provide – particularly those that have lived in an area for a long time.”