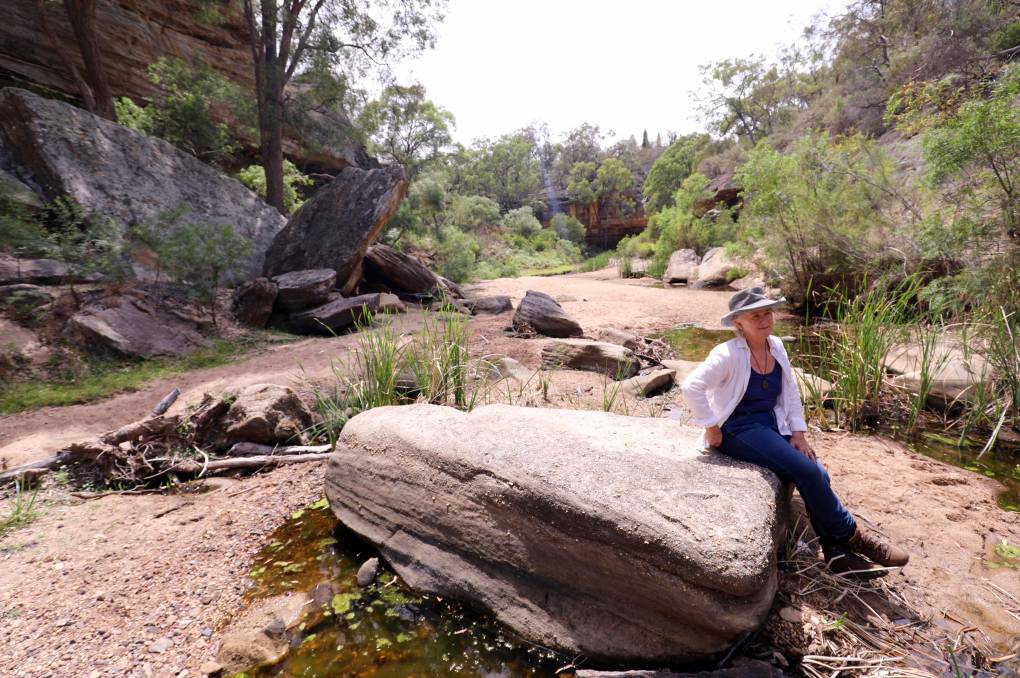 A CHANGING climate, “inappropriate” mine discharge regulations and poor groundwater modelling could see the Goulburn River’s salinity reach a level where it challenges the Hunter River salinity trading scheme, a new report has found.

The largest tributary to the Hunter River is under threat because of groundwater impacts from the large Ulan, Moolarben and Wilpinjong coal mines and mine water salinity discharge levels set much higher than pre-mining levels, researcher Dr Julia Imrie said in a report on how an uncertain climate could exacerbate existing problems.

Dr Imrie, a prominent activist for the Goulburn River and the iconic The Drip Gorge near Mudgee, said the work for her doctorate in October shows the river’s complex salinity balance between naturally-occurring higher saline aquifers and freshwater tributaries is under threat, and could pose a threat to the Hunter.

Her report shows proposed future mining near The Drip Gorge on the Goulburn River could significantly impact the springs, seeps and groundwater that feed The Drip and give it its name, but also impact its fresh water contribution to the river.

The Department of Planning said Yancoal’s Moolarben Coal is finalising an easement under an agreement with the NSW Government to protect The Drip, after an outcry in 2012 when its secret sale to Moolarben was made public. But Dr Imrie said the iconic gorge remains at risk  from  the impacts of mining on all water sources in the area.

“The Drip Gorge is an extensive perennial spring that seeps from a multilayered sandstone cliff abutting the upper Goulburn River. The seeping cliff face forms a potential window into the relationship between the groundwater system and source of baseflows to the river,” Dr Imrie said.

While her research shows a new proposed mining area near The Drip will lower the water table on both sides of the gorge by up to 20 metres and impact river flows, a mine report predicted a 10 metre water table reduction, a slight reduction in river baseflows and relatively no impact on The Drip.

Her research argues mine subsidence and groundwater depressurisation near the mines has altered the general hydraulic gradient away from the river towards the mines and reduced river baseflows.

By 2025 Ulan, Moolarben and Wilpinjong mines are predicted to draw nearly 20,000 megalitres – or the equivalent of 8000 Olympic swimming pools – of surface and groundwater from surrounding areas, Dr Imrie said.

All three mines are licensed to discharge excess treated water to the Goulburn River, but Dr Imrie argues the allowed salinity level of 900EC is significantly higher than river salinity before mining. The NSW Government said drinking water was between 600EC and 1200EC.

The Hunter River Salinity Trading Scheme aims to keep saline levels below 600EC at Denman, and 900EC at Glennies Creek and Singleton.

“Mine water discharged into the headwaters of the Goulburn catchment has the potential to affect salinity levels and salt loads over the 225 kilometre length of the Goulburn River and on to the Hunter River below Denman,” Dr Imrie said.

“Water allocation licences for the Goulburn River appear to disregard the varying geology of the catchment and the impact of different geologies on stream salinity. Southern streams draining the Triassic sandstones mitigate salinity in the Goulburn, while some of the northern streams contribute higher salt yields,” Dr Imrie said.

“Extracting more water from lower salinity catchments will increase the salinity of Goulburn discharge into the Hunter. Equally important, any decrease in rainfall with climate change will decrease discharge and increase salinity.”

In 2018 an expert scientific committee warned the NSW Department of Planning that elevated salt loads caused by controlled and uncontrolled water discharges from the Ulan, Moolarben and Wilpinjong mines into the Goulburn River could impact the Hunter River Salinity Trading Scheme.

Modelled discharges of up to 50 megalitres of saline treated water per day from just two of the mines, Ulan and Moolarben, “may be inconsistent” with the scheme, the Australian Government-established Independent Expert Scientific Committee said in a report in response to Yancoal’s plan to increase production at Moolarben from 13 to 16 million tonnes per year.

A NSW Government WaterInfo website notes “a large proportion of fresh water entering the Hunter River is expected to originate from the Goulburn River”.