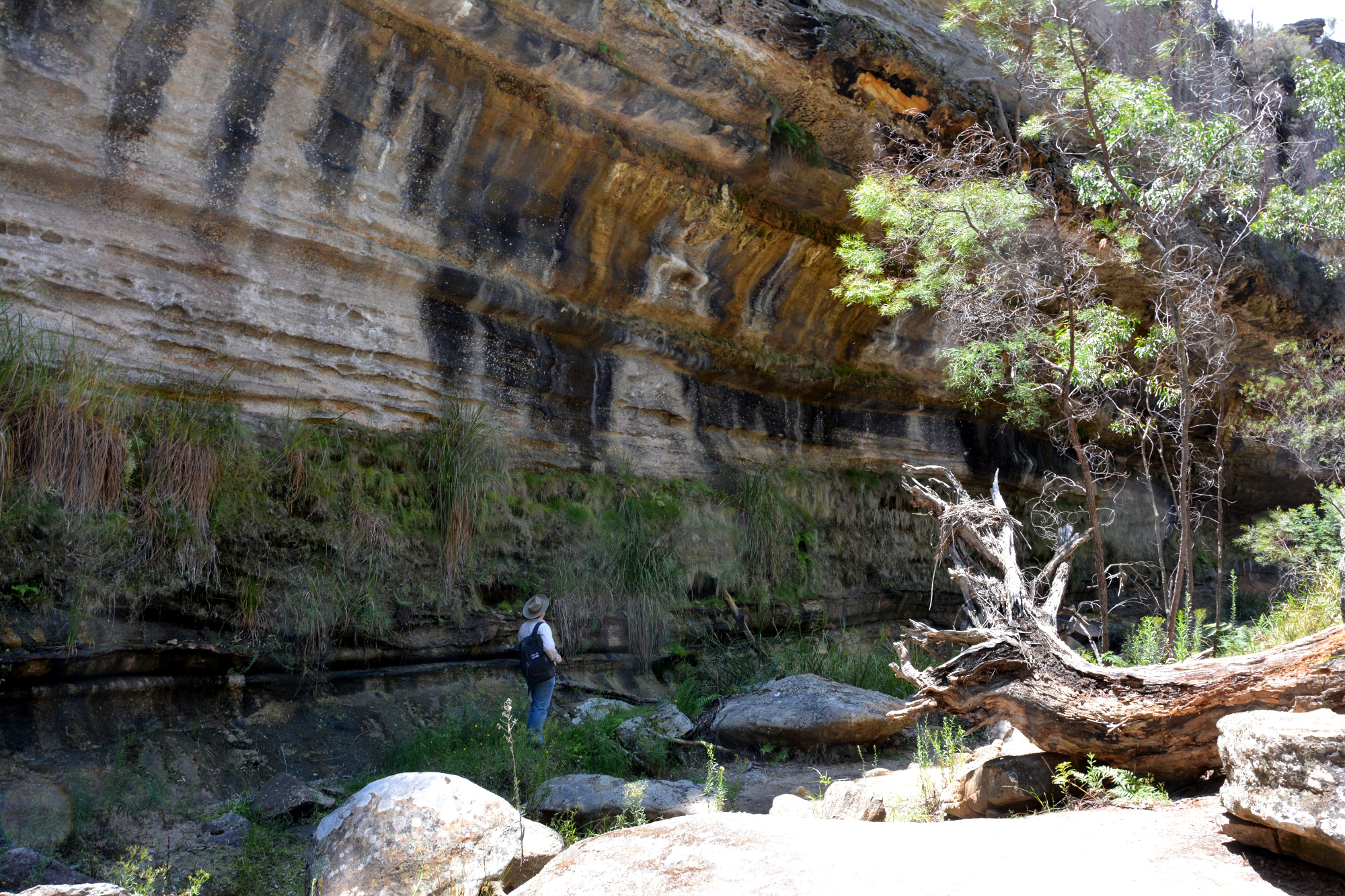 The Campaign to Save The Drip Gorge in New South Wales has been running for years, but the women on the front line still aren’t satisfied.

This was the heading used by journalist Tom Melville after he interviewed locals and heard about the long and on-going battle to protect the heritage listed landscape. His report was published in the Mudgee Guardian October 30th 2020 and copied below. https://www.mudgeeguardian.com.au/story/6988862/is-the-drip-safe/?cs=19616

The podcast is available as Episode 5, Voice of Real Australia. You can hear Tom’s commentary, beautiful sounds from The Drip, and selected segments from the interviews.

Dr Julia Imrie has the demeanor of a school-teacher and a tour guide rolled into one. About halfway along the track from the car park to The Drip Gorge, she takes us off the path, through the scrub, and onto the sandy riverbed.

“Brett Whiteley came out here in the early 1970s looking for The Drip and was a bit of a showman. He was painting on canvases, then turned around, stripped off naked and decided he’d go a little bit natural and he painted these here.”

The murals Whiteley painted — birthing figures appropriated from Indigenous bark art from the Northern Territory — have lasted 50 years. Despite lichen replacing some of the acrylics he used, the paintings should last a long time yet.

But the concern among the women I’m with – Aleshia Lonsdale from the Mudgee Aboriginal Land Council, Phyllis Setchell, Rosemary Hadaway, and Dr Imrie from the Mudgee District Environment Group – is that without their efforts, The Drip, the surrounding bushland, and the water table itself are in danger.

“They’ve already got evidence their underground mining at the Ulan and Moolarben mines is having a drawdown effect on groundwater up to two kilometers away from the active face of the longwall,” Dr Imrie says.

Up until now, Phyllis says, mining has been far enough away that visible impacts on this stretch of The Goulburn River have been limited, although “the subtle impacts have been gradually increasing as it’s come closer, and as the mining has become a larger enterprise than what it used to be I think the combined effect of the Ulan mine and the Moolarben mine on the river is obvious now.”

She says that river flows in times of extreme drought, particularly at the picnic area off the Ulan Road, are increasingly dependent on discharge from desalination plants at the nearby mine. Dr Imrie adds “So even coming within 500 meters of here, you’re going to have an impact on the on the groundwater that would normally make it to the river.”

The next stage of Moolarben’s expansion will start in the next few years and will see underground mining brought within 500 metres of the stretch of river between the car-park and just west of The Drip. Yancoal, the Chinese company which owns the Moolarben mine, says all its plans have been rigorously assessed by relevant state and Commonwealth agencies, as well as the Independent Hearing and Assessment Panel. Part of their planning approval includes a provision for “Nil Impacts” on The Drip itself.

But Dr Imrie wonders how that can be ensured. The Drip relies on the surrounding water table and if that gets impacted, so will The Drip. She’s also not convinced of the mine’s modelling, telling me that predicting what will happen with groundwater is like throwing a fistful of confetti into the air and tracking a single piece.

Save The Drip Campaign wants the whole area classified as National Park to create a protective buffer zone around the gorge. Currently some sections are State Conservation Areas. State Conservation only protects the surface and a short distance beneath it, while a National Park protects right to the centre of the earth. This distinction is particularly important when you consider the possibility of Yancoal putting tunnels underneath the State Conservation Area to facilitate mining on the north side of the Goulburn River, a possibility which these women fear could cause the cliffs to subside rendering the area too dangerous to visit. Yancoal says there is no application for, or approval to conduct mining underneath the Goulburn River in the area.

We make it to The Drip. It hasn’t rained much recently, but the tell-tale slap of water hitting the river as it slides down the sandstone cliff face fills the air. The Drip is safe for now, and that’s thanks to the efforts of these women and others. But for them, the fight will continue.

As will mining in the area, possibly for decades. But it won’t go on forever, and Hugh Bateman – local businessman and philanthropist – is conscious of that fact.

Hugh says that mining in the area has a limited life-expectancy for two reasons: “because of the requirement of the Paris agreement and also the amount of coal that’s out in the Ulan area. But I think that we have to be acutely aware of life after the mines.”

His vision for Mudgee going forward involves it becoming a diversified business and industry hub, benefitting from a potential reset of metropolitan priorities brought about by the Covid pandemic.

“What we’re seeing now is a lot of people are working from home and realising that they can do just as much in regional New South Wales as they can in Sydney. And of course, they’ve got a lovely big backyard instead of being locked up in a one or two-bedroom unit.”

In terms of The Drip’s longevity, Hugh trusts that the mines know what they’re doing and have the technology to make sure no damage is done to the area. I ask if there’s a tension between the value of our natural heritage, and the economic benefits mining can bring.

Back at The Drip, I put that same question to Aleshia Lonsdale, Chairperson of the Mudgee Aboriginal Land Council.

“From our perspective, it shouldn’t be the imbalance where the priority of economic benefits outweighs community benefits and cultural values. It’s very skewed in favor of coal mining. What does it take to outweigh a coal mine? Because I haven’t seen it. I’m 40 and I haven’t seen that in my lifetime. So what does it actually take?” she says.

On the surface The Drip is safe. The gorge itself is inside a national park, and the Aboriginal Land Council and National Parks and Wildlife are working hard to maintain the track and bush around it for all of us to enjoy. For the people who have fought to keep it safe, however, the threat of the mines still hangs heavy.

Hugh is hoping for a bright future for Mudgee in a world less dependent on coal mining. And Julia, Phyllis, Aleisha and many others want to ensure The Drip is a part of that future.