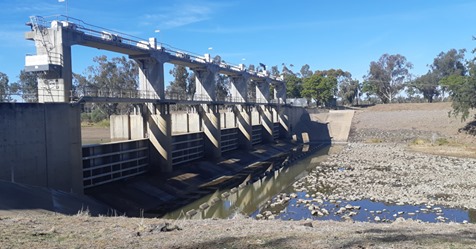 No New Weir. Don’t Damn The Macquarie.
Healthy Rivers Dubbo has launched a community powered campaign featuring television, radio and newspaper advertisements to highlight concerns about plans to dam the Wambuul Macquarie River at Gin Gin, between Narromine and Warren.

Next month the Detailed Business Case for the proposed ‘Macquarie River re-regulating storage’ is due to be submitted, although there is no indication that the public will get the opportunity to see it. We know the cost of the project is over $30 million because of its classification, but the actual forecast cost is being kept from the public, and is expected to be a lot higher.

It’s time now for the NSW Government to change their plans. Don’t dam the Macquarie with a monstrous gated weir, instead rebuild the old Gin Gin weir at the same height, with a fishway.

Coral Peckham, Tubba-Gah Maing Wiradjuri,
“We’re concerned about our sacred sites along the river, and our aquatic flora and fauna. They all need water. Our aims and objectives are to look after Country for future generations.”

Sandra Peckham, Wiradjuri Bogan River People:
“No dam. If this dam goes ahead and a heritage site is destroyed, it will be just like what Rio Tinto did in WA, knowingly destroying cultural sites. “

Garry Hall, Grazier, Macquarie Marshes:
“Roy Butler has the opportunity now to stand up and represent the people of Barwon. This dam will be a disaster for communities, downstream graziers and unregulated irrigators in his electorate. We are the people who voted Roy in, and we need to know he is standing with us now.
“Preferred alternatives to improve water security would include the NSW Government changing its credit policy of allocating water that hasn’t fallen as rain in the catchment.
“The Ramsar listed Macquarie Marshes being in the seat of Barwon means Roy Butler must work hard to ensure the NSW Government meets its obligations as the manager of the internationally significant wetlands. How will those obligations be met when this project will mean a loss of important natural inflows to the Marshes every year?“Reduced flows in the Macquarie below Gin Gin will mean the Marshes will be drier more often, and it will be even harder to connect the Macquarie and Barwon Rivers, which is crucial for native fish migration and the health of the Darling River.”

Mel Gray, Healthy Rivers Dubbo:
“Dugald Saunders has a choice to make. Will he listen to the community, or allow the river to be turned into an irrigation delivery channel that supports only a privileged few?
It’s time for Dugald to stop the haemorrhaging of public funds being used to design a project that will harm the river, wildlife, the Macquarie Marshes and downstream farmers and communities. Change the plans now – rebuild the old weir, don’t damn the Macquarie.”

David Harris, Project Manager River Repair Bus, Dubbo:
“Bit by bit we are changing the river and making it harder for native fish to survive. This dam will destroy habitat for Murray Cod, Trout Cod, Silver Perch and other species for a 30km stretch, and that includes drowning beautiful old River Red Gums that are hundreds of years old and cannot be replaced.”
“This dam would make a mockery of the many long hours invested by the community in repairing the habitat of the Macquarie River for native fish.”

Neal Harris, Western Paddlers NSW, Mudgee:
“As recreational paddlers, members of Western Paddlers NSW love paddling on the Macquarie River and the Macquarie Marshes. River paddlers seek out natural waterways, and more dams means we’re losing more and more of our wild rivers.
Thirty kilometres of still water, with no vegetation, poor water quality and reinforced banks is not what our paddlers expect or want to experience on the Macquarie, and we would regarded that section of the river a no go zone for paddling.”

For more information about the project:
https://healthyriversdubbo.com/macquarie-river-re-regulating-weir-gin-gin/

Image: The Tareelaroi Weir on the Gwydir River. The proposed weir would be much bigger, with 10m high walls.

Healthy Rivers Dubbo is a grass roots community group dedicated to providing a strong voice for our local rivers, aquifers and wetlands in the Murray-Darling Basin for the benefit of wildlife, plants and people. We pay our respects to the Traditional Owners and Elders past, present and future, of the lands we live on, and acknowledge that this land was never ceded.
13/7/2020