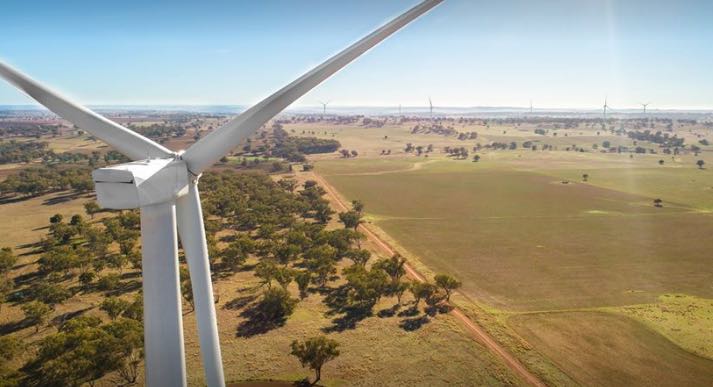 “Wind power is currently the cheapest source of large-scale renewable energy. It involves generating electricity from the naturally occurring power of the wind.

Wind turbines capture wind energy within the area swept by their blades. They produce a power output proportional to the air density and the wind speed cubed. The spinning blades drive an electrical generator that produces electricity for export to the grid.

The largest project in 2017 was the 240 MW Ararat Wind Farm in Victoria, while the Hornsdale 2 (109 MW) and 3 (100 MW) projects were also significant additions.” https://www.cleanenergycouncil.org.au/technologies/wind-energy.html

The Central West is part of this exciting growth industry. The first three turbines from the 113MW Bodangora wind farm have begun exporting to the grid, taking the number of wind farms connected to the grid in NSW to 11.

According to the Infigen Energy website the project will comprise 33 wind turbines, a substation, access tracks and an electrical collection system of underground and overhead cables on the land of seven host landowners. The wind farm will have an installed capacity of 113.2 MW, which can generate enough electricity to supply ~49,000 NSW homes a year. https://www.infigenenergy.com/bodangora/

Did you know that wind power is the lowest cost renewable energy technology that can be rolled out on a large scale? Also technological advances mean that wind turbines are now larger, more efficient and make use of intelligent technology. Rotor diameters and hub heights have increased to capture more energy per turbine. The maturing technology means that fewer turbines will be needed to produce the same energy, and wind farms will have increasingly sophisticated adaptive capability. That’s a win-win situation!